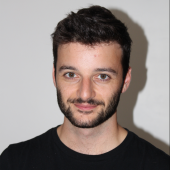 Here’s a thought: fashion is in great need of some romance. Hence the omnipresence of ruffles and frills on the fall/winter 2017 runways. Though we have become accustomed to this trend making an appearances as soon as Spring has sprung, the textile embellishment is currently having a moment during these cold weather months. Thus the question: is Fall the new Spring? Rest assured, the answer is obviously “no”. Even if they profusely made use of the ruffle, designers from Balenciaga to Christian Dior and Versace didn’t stick to that oh so ethereal aesthetic you would immediately – and rightfully – think of. In fact, Demna Gvasalia Balenciaga’s collection told a story of restraint, the first chapter exploring strict-looking ruffled collars and cuffs on silk blouses paired with business skirts. But by the end of the Balenciaga sow those ruffles were transformed into voluminous and unapologetic tent gowns. At this point, some of Molly Goddard’s best work must pop in mind. Her evanescent tulle dresses always seem to originate from a couture version of “Alice in Wonderland,” still they only illustrate one aspect of the intriguing appeal of this season’s use of ruffles. One thing is for sure: this is not a one-note trend. In fact, there is a ruffle for every customer. There is the rhinestone-embellished leather ruffle at Saint Laurent, the ruffled trousers at Simone Rocha, or the subtle ruffle detail on a zipped-up jacket at Yohji Yamamoto. In Paris, both Louis Vuitton’s Nicolas Ghesquière and Valentino’s Pierpaolo Piccioli were giving mini-ruffles a go. The look: a contemporary woman who wears her delicate dresses with boots and her petite malle across her chest. In contrast, Mulberry’s ruffles gave birth to larger-than-life dresses. As for Jonathan Anderson at LOEWE, he playfully gave the feature a patchwork spin.

One designer who is a  master of femininity and romance is Giambattista Valli. But he surprisingly paired a beautifully knotted blouse with navy Nike leggings in his latest collection. Intriguing indeed, as was Jeremy Scott’s purple tracksuit embellished with ruffles on shoulders and waist. As much as silk or organza, athletic wear did have its ruffle moment, and if you’re still having doubts, one look at Donatella Versace’s collection should be enough to convince you. The power of the ruffle sometimes even comes from the abstraction of it, that was the direction that the house of  Issey Miyake took.

Be it real or inferred, the ruffle is riding a wave of success this season. 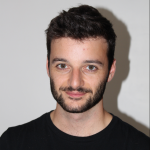