Hugo Marchand, who at 24 is a danseur étoile à l’Opéra national de Paris, met me for a coffee – he drank water with lemon – willing to provide more than the right answers for ODDA. “Next season we’re doing a series of shows for kids who have cancer or have been sick. It’s a special performance to share with others, in order to collect some money,” Marchand explained to me his plans, “We are taking the ‘spotlight effect’ on us to give it back to the community, to fight for what is right.” Just afterwards, Hugo shared with me some other thoughts before stepping into the joyful idea of summertime. I left our meeting feeling triumphant, like Siegfried taking Odette into the Heavens by the end of act 4 of Swan Lake.

How did everything start?
It’s been a journey. I was born in Nantes, a city in western France on the Loire, and I began ballet when I was nine years old. In 2013, I started my four years at L’École de Danse de l’Opéra de Paris, in Nanterre – it’s normally six, but since I had a late beginning, I worked hard to achieve the goals as soon as possible.
I remember that it was hard, but also exciting. I was learning everything about my future job while, at the same time, I attended school in le conservatoire in the morning. I tend to take it as a seed. I had the opportunity to discover it and helped it grow; some people never do that, some others don’t have it. Before that, I also did gymnastics.

Would you like to tell us about your vision about the human body as a tool to impress others?
Before having the chance to impress others, you have to practice a lot and, if you miss two or three days, your body starts to forget. It is human nature, I think. Our bodies, I like to say, can be compared to the ones of the athletes, they are machines: some people are making history in the Olympics, and we make it, too, but as ballet dancers. However, we also have to be able to express how beautiful the music is, how touching the story, how synchronized we are with the light and how in touch we are with the statement the choreographer wants to make through the movements in the choreography.

As a danseur étoile à l’Opéra de Paris, what do you think is the human body’s mission?
For me, using my body to do something that can help humanity is the most powerful thing. I’m an ambassador, along with some other great dancers, of the What Dance Can Do Project [a Zurich-based organization launched in January 2017 ed.] and we are trying to use ballet to raise awareness among companies, dancing to effect some kind of outreach or change. That’s our mission!

Can you describe your experience when this tool, your body, started to get more productive and became an essential part of your career?
Yes, for most people outside, one has to be paid to add the productiveness gene to their career but, for us, this starts when we get to learn the techniques, and so on. For me, going to the Opéra is like going to the office, a beautiful one. I work very hard every day, sometimes on weekends or during the holidays. The only different thing from the rest of the world is that, by the end of the day, we’ve been applauded, that we get recognition for what we do. I like to think that this is it, nothing more. I have never seen myself in front of the mirror to admire myself that way, because I know how difficult it is. I don’t think someone that’s good at their job does that or whatsoever.

Ballet is a discipline that implies a lot of sacrifices. Having said that, would you share with us the pros and cons of developing a career as dancer?
I don’t like to see pros and cons. I also think that, when your body decides that it is over, it is over. One day you are jumping, carrying a ballerina in the air, you are feeling free, but there is also a moment when you are on the floor, with your feet broken, almost fainting because of the intense pain: not even the cold of the ice touching your skin could make you go back to life and you find yourself waiting to be taken to the emergency room, to be off for weeks. That happened to me, that’s why I’ve highlighted that you have to be ground-based to not hurt yourself deeper. I’m sure that’s the same in every field. I saw you in L’Anatomie de la Sensation (2015) and that was a confirmation of your talent, which makes performing seem so easy. I was wondering, what happens when difficulties come along? What goes through your mind and how does it feel when your muscles get injured, just when everything is ready to go on stage?
You feel helpless, because there’s nothing you can do to reverse the damage as soon as possible.
We are trained to know how every muscle works, so you do the math when things like this one come in your way. Can you imagine torturing yourself everyday with questions like, “Are you good enough? Are you thin enough? Are you strong enough?” That’s why having a life out of the company is so important for dancers, for me.

How does sponsorship happen anyway in the ballet scenario?
I haven’t had that encounter since it is not part of my experience so far. Sometimes, you have big designers coming to the ateliers inside the Paris Opéra, but their job involves the whole company of dancers. These designers are commissioned to create our costumes for certain stories or shows, like Christian Lacroix, for instance.
I’m aware that some ballet stars have worked with brands in the past, take Dorothée Gilbert, danseuse étoile à l’Opéra de Paris and égérie Repetto for example. The fact is that we have a very restrictive contract; our image is for the ballet, not for anyone else. We have to ask for permission, because our names belong to the Opéra.

What do you think you would be doing today if you weren’t a dancer?
I don’t know. I would probably be doing something related to physiotherapy.

Now, considering your work and your celebrity personality in the making, have you elaborated your conclusions on how different this present is from your future?
I am living and enjoying my present, but jumping into conclusions is adding unnecessary pressure to your mind. So, what you are going to do next is pretty much based on how you have been able to develop that throughout half of your life. 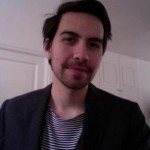